Posted on December 26, 2014 by jaythurbershow 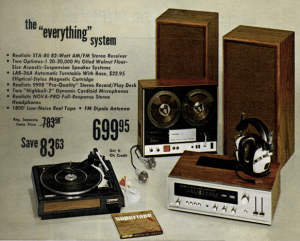 Despite popular demand, Pittsburgh’s WRCT-FM (88.3) will again ring out the old year by turning back the clock 40 years.

In a radio tradition that’s now more than a decade old, and which is tolerated by tens of dozens of listeners, WRCT’s resident oldies guru, Jay Thurber, will count down the top tunes of 1974 this Wednesday, Dec. 31, 2014 from 9 a.m. to 12 noon.

The broadcast also will be available online at http://www.wrct.org.

The countdown by Kindly Uncle Jay, Your Radio Pal™, who hosts an oldies program on WRCT on Saturday afternoons (www.jaythurbershow.com), will include 1974-current news reports, commercials and other announcements.

The “number one song of 1974” — as calculated by Jay from a completely scientific (ha! ha!) formula — will be unveiled just before 12 noon.

A non-profit radio station owned by the students of Carnegie Mellon University, WRCT-FM is staffed entirely by campus and community volunteers. Broadcasting 24 hours per day at 1,750-watts on the FM dial, WRCT’s signal reaches all of Allegheny County and parts of three adjoining counties.

Its programming includes all types of music, Carnegie Mellon sports, and public-service and educational shows such as “The Saturday Light Brigade,” as well as news from the Pacifica Network. The station signed on at 900 AM in 1949 and moved to the FM dial in March 1974.

WRCT can also be heard online at http://www.wrct.org.

This entry was posted in Show Notes. Bookmark the permalink.