The Who Mourns for a Piece of Yesterday’s Christmas Incident

Posted on December 24, 2019 by jaythurbershow 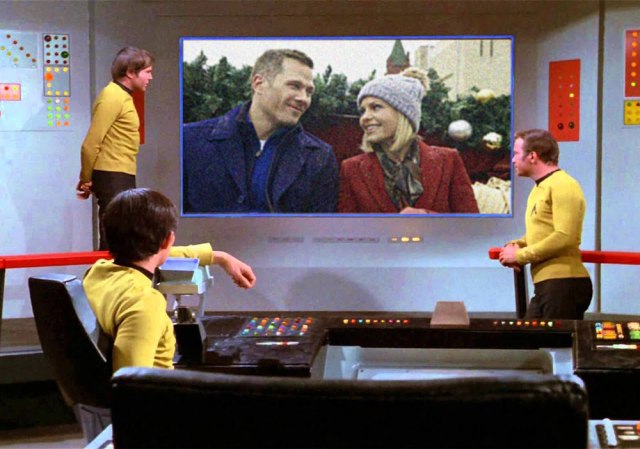 I’m envisioning an episode of “Star Trek” where they visit a planet whose civilization is based entirely on Hallmark Channel Christmas movies….

(MUSIC “ENTERPRISE” THEME, ESTABLISH and UNDER)

SPOCK: “A curious atmosphere, captain. About two-thirds of the planet is covered in water. Most of the land seems to be covered in snow. And yet based on the lifestyles of the inhabitants, the temperature rarely drops below freezing.”

SPOCK: “There has not been a war on Mistletoe IX in more than two centuries. Most of the governments appear to be small monarchies ruled by benevolent princes.”

SPOCK: “Apparently not, captain. There are large, technologically advanced cities that seem to employ most of the young, single women.”

UHURA: “Captain, someone on the planet’s surface is hailing us.”

KIRK: “On screen. This is Captain James T. … Kirk. Of the Federation Starship Enterprise. We … received your distress … call. We come in … peace.”

MAN ON VIEWER: “Greetings, captain. I am Count Ludwig von Friedrich, prince regent, viceroy and ruler of Amoria. Thank you for responding.”

KIRK: “Your highness, how can we be … of assistance?”

KIRK (motions to UHURA to cut off transmission)

SPOCK (arches eyebrow): “Fascinating. It took us 90 minutes to respond to this distress call, and it’s an utter waste of time.”

KIRK: “Oh, lighten up, Mr. Spock. We aren’t doing anything else at the moment. If we helped these people, it would be a … pleasant … diversion, nothing more. Instantly forgettable, certainly. A bland experience. But pleasant.”

McCOY: “I’m with Mr. Spock. Helping these people is a waste of our time. Dammit, Jim, is this a starship or the skating rink at Rockefeller Center?”

KIRK (thoughtful) to UHURA: “On screen … Your highness, would it be possible for me to send a team of my people?”

MAN: “You would be most welcome. Our entire kingdom is getting ready for the Christmas ball at my windswept mountain castle overlooking a placid lake.”

KIRK: “We’ll be there. Enterprise out.” (to McCOY) “I take it you … won’t be joining us for some light-hearted, romantic holiday merriment?”

McCOY: “What am I, a doctor or Andy Williams?”

KIRK (to intercom): “Mr. Scott, are you available for a formal ball?”

SCOTT (V/O): “Nae, captain, I canna keep these Christmas lights from g’wan out. I’ll be lucky if they’re sorted by Boxing Day.”

(KIRK heads for the doors. CHEKOV and UHURA stand up and walk towards him.)

KIRK: “Oh, and Lt. Sulu, you’re coming, too, in case we need a sassy gay friend to give advice to one of the single women.”

McCOY: “Do you still have that bottle of 12-year-old Aldebaran whiskey?”

McCOY: “Want to meet me in the briefing room in a half-hour? I think ‘Die Hard’ is on Subspace Channel Alpha-341.”

SPOCK: “Though ‘Die Hard’ is not festive, it is, logically, a Christmas movie. Watching it with you and Mr. Scott would be … informative.”

(McCOY and SPOCK head to turbolift)

McCOY (as doors close): “There’s hope for you yet.”

This entry was posted in Tongue Firmly in Cheek. Bookmark the permalink.